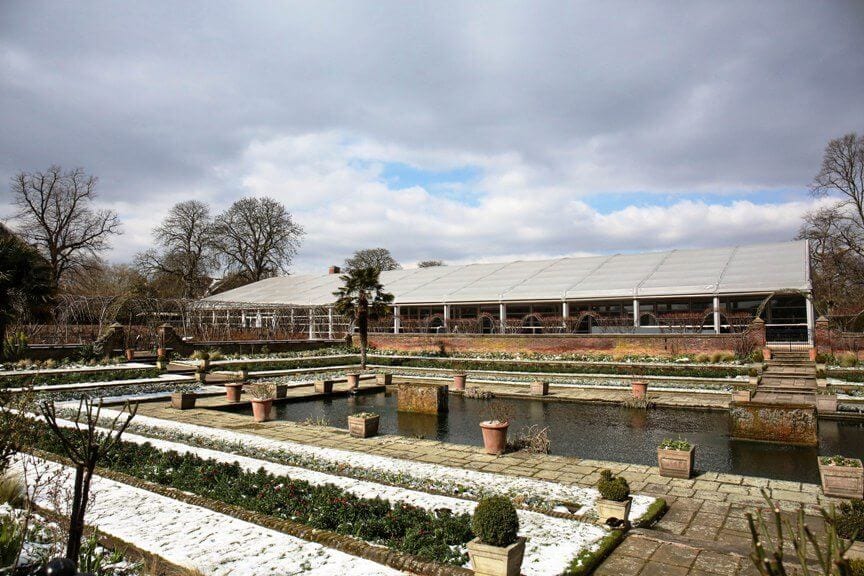 Arena Group has constructed and fitted out the brand new event space at Kensington Palace, with a three week build time and despite two lots of heavy snow!

The Kensington Palace Pavilion, which is open to host events from the end of March 2018, comprises of two main internal spaces covering 1,800sqm. One of these spaces is set to be an elegant café, open to the public, as well as providing an event space for conferences or pre/post dinner drinks receptions, whilst the other is a larger space perfect for sit down dinner events. With a curve roof, the temporary structure has capacity for 800 standing or 300 seated and overlooks the beautiful gardens of the palace.

As well as providing and building the bespoke grey-roofed structure, Arena Group has also fitted the interior providing colour matched panelled walls and bathroom facilities, aligning with Kensington Palace’s existing spaces as well as fitting out the kitchen and installing lighting.

The Kensington Palace Pavilion – erected by Historic Royal Palaces, the independent charity which cares for the palace’s historic state apartments and formal gardens  – provides the perfect space for events whilst Kensington’s eighteenth-century Orangery is closed for a major restoration project, and took just over three weeks for the Arena Group team to construct, led by project manager Daniel Bluff. Sir Robert MacAlpine was brought in as the principal contractor.

With the building in situ for two years, different regulations – including fire regulations – apply in comparison to if it was just set up for a weekend event, which Arena’s design reflected.

Says Arena account director Daniel Bluff: “It’s been a great pleasure to work on this project, particularly on such a significant and historic site.

“The build schedule was just over three weeks, which thanks to two snow storms made it a bit of a challenge as it cost us three working days. This was additionally challenging as a result of the limited working hours on this historically sensitive site. We drew on additional resources within the Group and delivered a space that Kensington Palace can be proud of. Ensuring an aesthetically smooth transition from existing Kensington Palace public areas to this new structure was high on the client brief and I think we’ve managed that from interior colours to the style of bathrooms.

For me, this project again highlights the broad capabilities that the Arena Group has as a business, providing a complete solution for the client.”