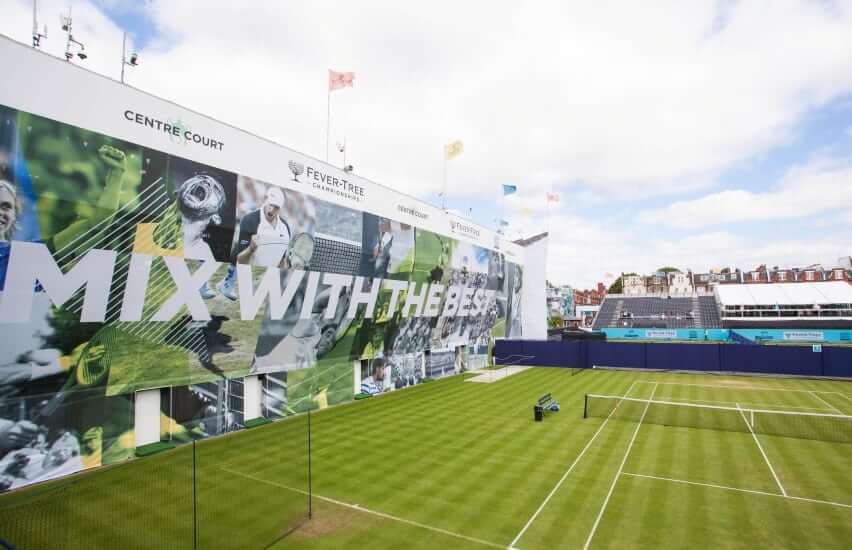 Arena delivered a wide range of temporary event infrastructure to support the LTA’s transformation of London’s Queen’s Club with a new look for The Fever-Tree 2018 Queen’s Club Championships, June 18-24, 2018.

The tournament has a 128 year legacy, which in the past 39 years has seen it go from being the Stella Artios to the Aegon and this year introduced the new headline, Fever-Tree Championships. It has also grown in stature when it was upgraded from ATP World Tour250 event to an ATP World Tour 500 event in 2015, attracting more of the top seeded players to play on pristine grass courts. Over 70,000 tennis fans were thrilled across a week when Andy Murray returned to court, culminating in Marin Cilic beating Novak Djokovic in a thrilling three set final.

“The new sponsorship deal was only signed three months before the event and we have worked with the whole team of supply partners to immerse the tournament in The Fever-Tree brand. I think it’s looking really cool out there. The structures & seating have never looked better and overall we are delighted with the end result. I am really proud of what has been achieved this year.

“We have six weeks to build and three weeks to dismantle, while the club is still operating for members. It’s an ever increasing challenge year on year, as we raise the bar in terms of the facilities and the customer experience we offer. The whole team relish the opportunity to work with the LTA’s staging team and helping deliver their vision.

“The seats have gone from blue to grey in the main 9,100 capacity grandstand and on the 900 capacity on Court one, with added Fever Tree splashes of colour all around, creating a distinctive fresh look. Arena also reconfigured the main grandstand to further improve sight-lines and the views from the top are truly spectacular.”

“We’re working to incredibly exacting time critical horizons, building on tennis courts and surrounded by residents – there are so many factors to consider. It’s a very carefully coordinated build that requires detailed scheduling and all of us co-operating very closely, both internally and with all external stakeholders. We have drawn on our in-house capability and inventory to support the LTA and achieve a very successful tournament which is one of our key flagship events.”

Arena delivers a number of double-deck structures, providing first class hospitality experiences at a range of price positions. Arena’s own designer, Rebecca Owen managed our internal design & fit-out team, delivering several venues which have been received very well from sponsors and end users alike. Having the opportunity to call upon sister company Spaceworks was an added benefit.