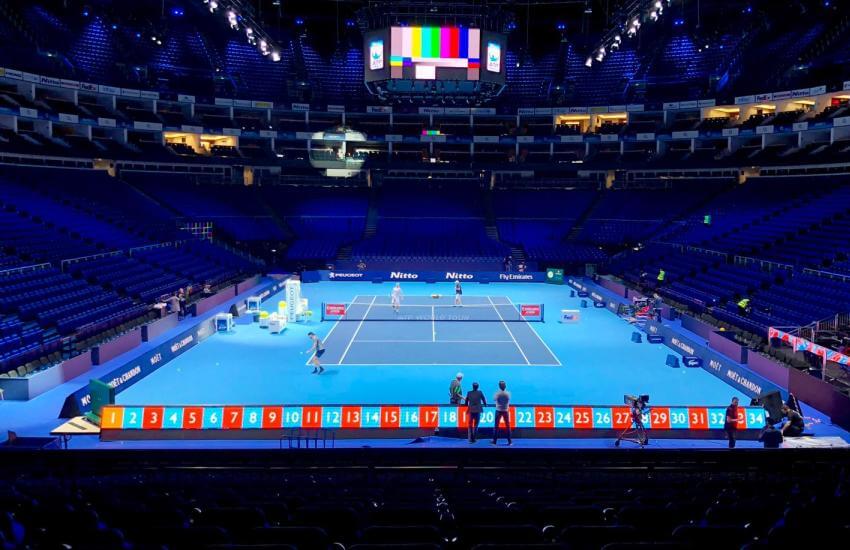 Arena served an ace combination of event services at the UK’s key tennis events across the 2018 season, which collectively attracted a million visitors, culminating with the installation of 6,800sqm of event infrastructure at London’s O2 Arena for the Nitto ATP Finals, Nov 11 – 18, 2018.

June’s new look Fever Tree Championship was the first tournament to welcome a host of top seeds to its hallowed Queens Club courts. The depth of Arena’s turnkey services was evident from the array of double-deck structures providing hospitality and public bars and concessions, with stunning interior design and fit out by Arena, alongside Spaceworks furniture and Well Dressed Tables. Most impressively Arena invested in new grey spectator seats to match the incoming sponsors branding for the newly configured 9,100 grandstands wrapping three sides of the main court, with a further 900 seat grandstand on Court 1.

The Wimbledon Championships 2018 saw the same combination of Arena’s temporary event structures, seating, furniture and CCG in July. The distinctive green and white colour schemes and incredible VIP chalets created a distinctly different ambiance, having been designed to suit the requirements and branding of the clients.

This was the 10th year that Arena’s Dan Bluff project managed the ATP Finals extension to the capacity of the O2 Arena, installing a temporary I-Novation building adjacent to the venue’s main entrance. Within the impressive I-Novation were two triple-decker structures flanking the players main practice court. The glass wall giving great views of the iconic O2 dome structure was treated to avoid the glare of the sun reflecting off the white venue. The triple-deckers were transformed with creative interiors by Arena, or sponsors’ own agencies, with fully appointed facilities to provide the luxurious player’s restaurant and lounge, a tennis family’s restaurant, sponsors’ hospitality and reception area. Arena invested in three-stop lifts and installed a complex heating and air con system that kept the players court warm and the VIP suites at a lower temperature. Arena supplied all of the interior walling and lining along with carpets, lighting, toilets, lifts, catering hoists HVAC etc the completed areas were then handed over to various sponsor agencies for the final install.

Guests entered this ‘VIP Village’ via a reception area, which incorporated accreditation and ‘airport style’ security, joining seamlessly into the main building. Separate triple-decker structures were also joined at the rear to house the kitchens.

“This is the finalé of a tiring season for the players, where the top eight seeds battle for the ultimate prize. It’s important for the ATP family that we create an ambience that treats the players well, helps them relax and, given the up-beat style of the tournament, reflects the fun and prestige of the event.

“Arena has been an integral part of our team since we first came to the O2 in 2009. They have helped us raise the bar year on year and 2018 is no different. We haven’t made any fundamental changes to a winning formula, but there have been some key areas we’ve evolved with them. The redesigned top floor of the players’ facility is a great example, where we’ve emphasised the place-maker location we’re in, by creating a top floor restaurant with glass walls to give a 360-degree panorama, which is particularly stunning at night.”

A second practice court was situated inside a TFS to the rear of the O2. Inside the main tennis auditorium, Arena installed three temporary broadcast studios at one end. These were specifically designed and manufactured by Arena for this event to host the BBC and Sky cameras and presenters studios. Arena also supplied media areas, including structures within the 02 loading bay, a reception area, 355 media desks, and a soundproof radio broadcast studio.

In keeping with the ATP Final’s fresh, energetic presentation of the sport, a new face lifted the trophy. Alexandra Zverev defeated World No. 1 Novak Djokovic to cap off a thrilling year of tennis with Arena providing progressive event services to augment three iconic venues.