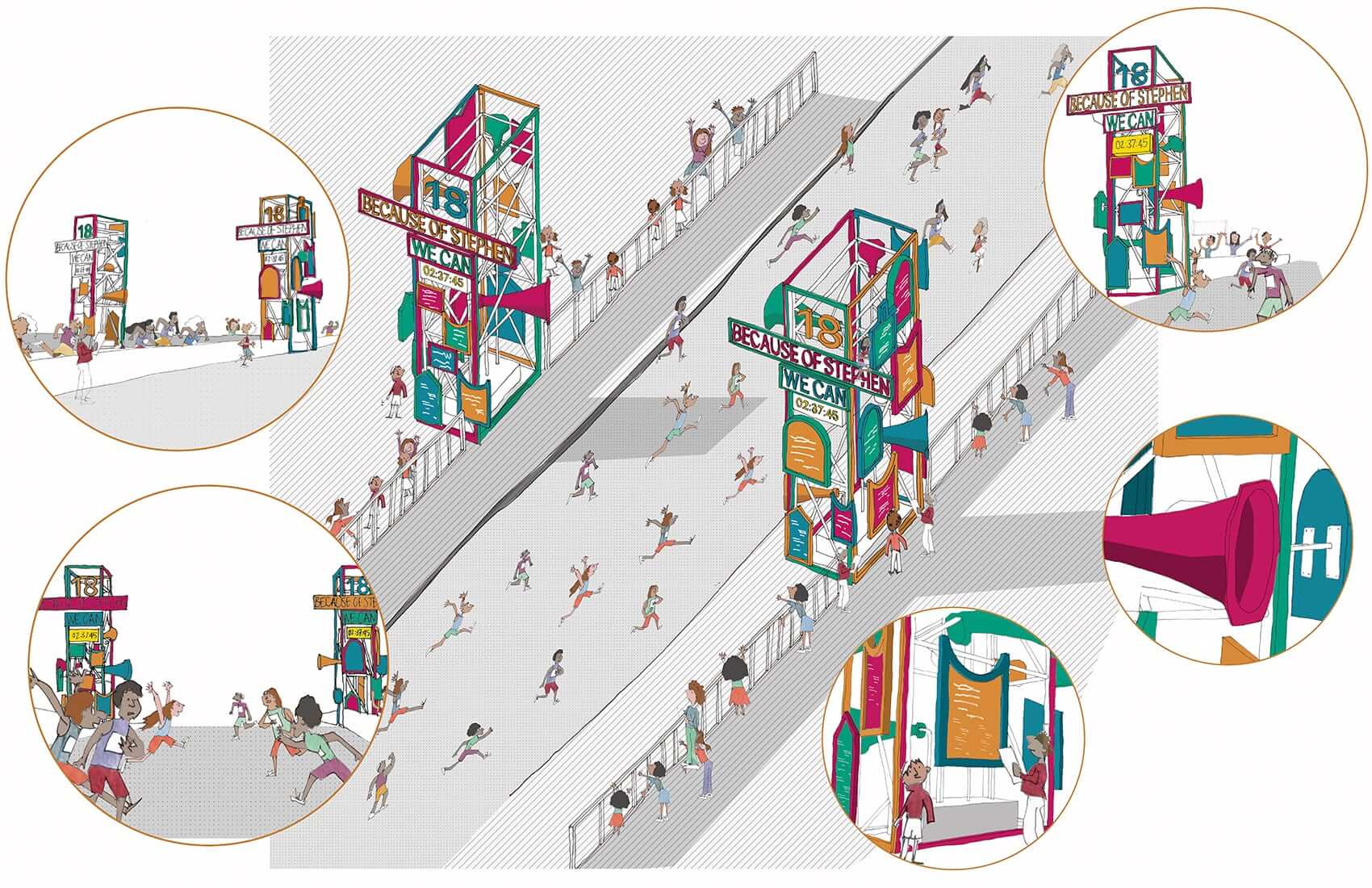 Arena is thrilled to support a new initiative led by the Stephen Lawrence Charitable Trust and London Marathon Events Ltd with a competition for aspiring young architects to design the Mile 18 marker for the 2019 Virgin Money London Marathon on Sunday, 28 April.

On the evening of 7 February 2019, the winning team were revealed at the Stephen Lawrence Centre in South London: Ayanna Blair-Ford, Shreeya Radia and Quincy Haynes – all Part 1 graduates from separate London architecture practices.

The design, which celebrates the life and legacy of Stephen Lawrence, who was 18 when he died, will form an inspiring focal point for runners and spectators during the marathon. The competition has provided a rare opportunity for young architects to have their design built and seen by the 41,000 runners in the marathon and millions more around the world watching the race on television.

The competition also reflects Stephen’s own aspiration to pursue a career in architecture as well as his love of running – he was a member of the Cambridge Harriers running club, and competed in the Mini London Marathon in 1988.

Before submitting their ﬁnal designs, ten shortlisted teams were invited to the Arena workshop in St Ives, Cambridgeshire to observe how the marker is constructed, and to demonstrate the need to be practical with their design concepts.

For over two decades, Arena Project Director, Martin Clark has supported the Marathon with temporary structures, as well as seating for the start and ﬁnish lines. He was also invited to be part of the competition judging panel, alongside Baroness Lawrence, representatives from London Marathon Events Ltd, and the Trust’s architecture advisory board.

“We are delighted to have supported the London Marathon event for 24 years. It is one of my favourite events to deliver,” said Clark, who has spent over 30 years working at Arena Group.

“We organise a skilled team to tackle the logistical challenges of installing over 50 structures in just 48 hours before the event and removing them only several hours after the runners have passed, which is a pretty impressive accomplishment given we are working in the City of London, alongside open roads.

“This year is very special and signiﬁcant. The #BecauseOfStephenWeCan Mile Marker is going to look awesome and we can’t wait to build it with the winning designers!”

Clark adds: “We are so proud to be partnering with the Trust, London Marathon Events and the winning team. Together we will be a real driving force behind this inspiring and ground-breaking initiative.

“We feel incredibly privileged to be part of the competition and to have responsibility for overseeing the build and delivering the Marathon Mile 18 marker with the winning team.”

The winning concept was praised for the creative way it celebrates the life and legacy of Stephen Lawrence, and will form an inspiring focal point for runners and spectators on the day of the event.

The Mile 18 marker will incorporate brightly coloured plaques with quotes from young people describing the personal impact that Stephen Lawrence’s life and legacy has had on them. The structure will also project a mix of music and brief audio clips of people describing Stephen’s impact.

The design is also being developed to ensure that it meets health and safety requirements which is crucial for such a major sporting event.

Quincy Haynes, a member of the winning team, said “We wanted our design to acknowledge the tragedy of Stephen’s death, but also to celebrate his legacy and the work of the Trust. We are incredibly excited to see it built and hope that it will motivate runners as they reach one of the toughest miles of the Marathon.”

The winners will return to the Arena workshop next week to undertake a working at height training course so they can assist with the build, and to support their career portfolio.

The shortlisted designs are currently on display in a public exhibition at the Stephen Lawrence Centre until Friday, 15 February 2019.