The highly-anticipated match attracted the venue’s biggest capacity – 66,267 fans witnessed the first non-football event at the stadium since opening its doors to Spurs fans in April 2019. The result didn’t go the way the majority of the crowd hoped, with Usyk claiming a unanimous points decision to take Anthony Joshua’s three World Title belts.

Jon Hill, head of UK operations at Matchroom Boxing, said “The event on the night was spectacular, befitting the greatest prize in sport, the Heavyweight Championship of the World. Bringing this event to fruition required a lot of additional meetings to accommodate many changes for the Stadium, from late licensing to transport and an increased capacity”

Hill continued “We were fortunate to be able to stage this event at Tottenham Hotspur’s incredible state of the art Stadium. Arena and our other partners delivered again to make sure everything came together on the night”.

Matchroom Boxing and Arena have worked together for more than 35 years. During lockdown, Arena produced the Fight Camp venue in Matchroom HQ and earlier this month, the overlay specialist undertook a similar stadium turnaround at Headingly Stadium for world championship boxing between Mauricio Lara and Josh Warrington.

The Joshua vs Usyk fight was announced in late August, giving the production team a tight five-week window to transform the Tottenham Hotspur Stadium. Martin Clark, Arena’s project director, was entrusted to create the premium sporting venue.  Before the boxing production team arrived, the 9,000 Tonne soccer pitch was mechanically moved for protection into the space normally used as a car park by stadium staff.

Clark said: “We were the lead production co-ordinator for Matchroom Boxing, bringing together the specialist contractors from the ring itself, pitch cover, to broadcast facilities, sound, light and video. We also supplied more than 9,000 Arena seats, 3,100m of crowd barriers and 2,100m of cabling. 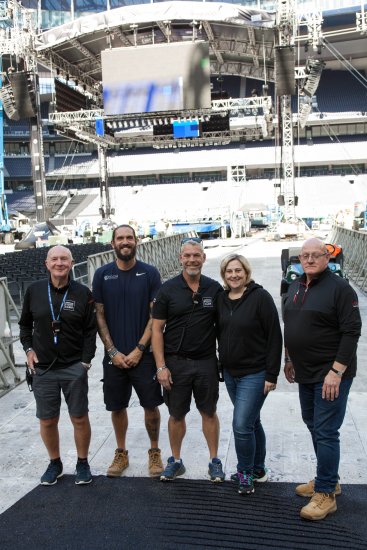 “The pitch featured three ‘levels’ of seating, with two inner rings for VIPs, match officials and the fighters’ teams.”

According to Clark, logistics and space were two of the biggest issues that the team faced, particularly as 300 people worked on-site to ensure the stadium was ready to welcome more than 66,000 boxing fans.

Clark continued: “We’ve executed an extremely quick turnaround, as the pitch was only rolled out on September 21, fitting in with the (Spurs) team commitments. The stadium staff were incredibly accommodating and it’s a great place to work.”

Gee Venter, Arena’s event production manager, said: “We started the build at 8 am on September 23. The roof over the boxing ring, technical production and two-thirds of the seating were installed on day one. These elements were overseen by Kaz Hill, our production coordinator.

“Kaz has been brilliant in ensuring we had all of the people and equipment we needed at the right time, against a backdrop of a scarcity of crew and items such as cable ramp.”

Venter added: “The Joshua v Usyk fight was the trial run for the stadium being used for anything other than football. It’s been great. It’s really well designed and the stadium team has been amazing to work with, accommodating our large production team and helping us all the way.” 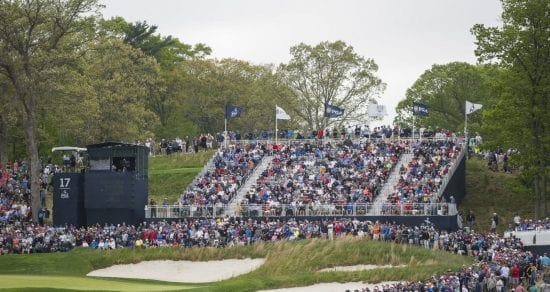